Visionary climate leader and ICAT Partner leaves a legacy behind

It was with great sadness to learn of the tragic news of the sudden death of our dear colleague and partner, Alfredo Sirkis (8/12/1950 – 10/7/2020). The ICAT Secretariat offers its deepest condolences to the family and friends of Mr. Sirkis during this difficult time.

Mr. Sirkis was a visionary and determined leader. He recognized early on the need for a strong global response to the climate challenge and the important role Brazil can and must play as part of that global response. He became a co-founder of the Green Party of Brazil and the first federal environment secretary of Rio de Janeiro.

As the Executive Director of the Centro Brasil no Clima, Mr. Sirkis championed climate action transparency in Brazil. His outstanding work in leading the ICAT Brazil Project in the country since its beginning will make a lasting impact on Brazil’s climate policies and actions.

Mr. Sirkis was central in bringing together a wide range of government and non-state actors, both at national and at state level, to advance implementation of Brazil’s NDC. Under his leadership, several scenarios for how Brazil’s NDC targets can be achieved were developed. Based on this a set of indicators to monitor the country’s progress towards those targets were drawn up.

In one of the most recent encounters with Mr. Sirkis at the Kick-off Workshop for the ICAT Brazil Phase II Project in March 2020, his extensive experience and expertise proved yet again invaluable in shaping the focus of the next stage of work in Brazil, which focuses on NDC implementation at the level of federal states.

The ICAT Secretariat would like to acknowledge the outstanding contributions Alfredo Sirkis has made, not only to the work of ICAT in Brazil, but to the country’s and the global climate action movement. His inspirational leadership will be sorely missed, yet his legacy will be long remembered by colleagues near and far. 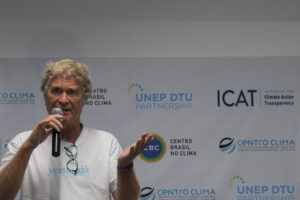